SIMPLE TIPS YOU CAN START IMPLEMENTING TODAY TO GET BETTER UPSTROKES!

3 TIPS TO HELP YOU GET BETTER CALLIGRAPHY UPSTROKES

If you had any of these questions, then this blog post is for you!

I’m going to share with you 3 tips to get better upstrokes.

Prefer watching over reading? Feel free to skip right to the video and see these 3 TIPS TO GET BETTER CALLIGRAPHY UPSTROKES in real-time!

Quick note: This post may contain some affiliate links for your convenience, which means if you purchase after clicking a link I may earn a small commission, but it won’t cost you a penny more)! Read my full disclosure policy here.

TIP #1: HAVE THE RIGHT TOOLS AND USE THEM CORRECTLY

The brush pen that you’re using matters. The upstrokes are going to be proportional to the size of the tip of your brush pen.

The Tombow Fudenosuke brush pen – hard tip will give you very thin upstrokes.

This is true for pretty much all the small tip brush pens that you have. When you go up, you’re going to get thin upstrokes, but you’re going to notice a difference when you use a larger size brush pen.

Like the Artline Stix. The upstroke is going to be even thicker than the dual brush pen. So, that’s one thing that you want to keep in mind that your brush pen matters.

Sometimes is not about doing super-thin upstrokes, it’s just about being proportional to your brush pen.

I’m going to keep showing you the upstrokes with this Tombow Fudenosuke brush pen, which is the pen that I do recommend for beginners.

If for some reason you’re not getting thin upstrokes with the pen that you’re using, try using this one or try using a different brush pen.

Another thing that you want to keep in mind is the way that you’re holding the brush pen. When you write normally, you will kind of like do, if you see here is kind of like a 90-degree.

When you’re doing modern calligraphy using a brush pen, you want to make sure that your pen is in the middle right here on your hand and at a 45-degree angle to your page, and this is going to help you when you do the upstrokes.

You want to make sure that the paper you’re using is smooth because that’s what’s going to help your hand and your pen slide better when you’re doing the upstrokes and you’re going to be able to create smoother upstrokes when you have the right paper.

The paper that I use is an HP 32 lb premium paper. I’m going to show you how it compares to a regular printer paper. You might not see the difference in plain sight, but the printer paper is not as soft.

Another reason why I don’t recommend using your brush pens in regular printer paper is that they’re going to get damaged and fray a lot faster than when you’re using premium paper or softer paper.

So make sure you have the right kind of paper when you are practicing your calligraphy.

TIP#2: THINK AHEAD AND KNOW WHERE YOU’RE UPSTROKE IS GOING TO

When you’re doing your upstrokes, your body can think ahead. One of the things that can help you get smoother and thin upstrokes is to think where your upstroke is going to go.

Not only when it’s coming from, but also when it’s going to lead to. You can either do a dot or do a mental note of where your upstroke is going to go.

In that way, when you’re doing it, you do a downstroke and then you connect it to your upstroke. Because you know where your upstroke is going to end up, you can do a quick line, and this is going to help you get the upstrokes to be smoother and thinner.

This is a little trick that you can do to get better and smoother upstrokes.

The one way that you can do is almost automatically is by practicing, which leads me to my next tip.

To get better upstrokes you need to practice, practice, and practice some more. I know this might not be what you wanted to hear, but I promise you practice really makes a difference.

To help you with your practice, I created this free worksheet, which is sort of like a continuation of my free calligraphy drills worksheet.

I created this worksheet for small brush pens, but you can also use your medium to large brush pens with it. Just keep in mind, your lines are not going to be as thin as when you use your small tip brush pen.

The last drill, it gives you a little sneak peek into flourishes, which are embellishments that you do to your letters.

OTHER THINGS TO KEEP IN MIND TO GET BETTER UPSTROKES

Practicing your upstrokes and making sure that you get smoother and thinner upstrokes really depends on so many different things. The amount of practice that you put in, your nutrition, hydration, and stress.

Before you start practicing your calligraphy, make sure you do a little check on yourself and your hand.

Make sure that when you start practicing your calligraphy, you haven’t had that much coffee. Also, nutrition and hydration are important because this could also mean that your upstrokes are not going to be as smooth as you would like to.

But as always, if your hand is shaky and that’s the only time you have to practice your lettering, a little practice is better than no practice at all.

I hope you found this blog post helpful to get better and smoother upstrokes and you start practicing today! 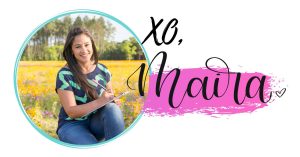 WANT TO REMEMBER THIS FOR LATER? SAVE THIS “3 TIPS TO GET BETTER CALLIGRAPHY UPSTROKES TUTORIAL” TO YOUR FAVORITE PINTEREST BOARD!

This site uses Akismet to reduce spam. Learn how your comment data is processed.

Hi, I'm Maira! I’m a wife to an amazing husband and mom to the prettiest tiny human! I know I’m biased on this one, but what can I say? I’m blessed to be her mom. I’m also a calligrapher, a lettering artist, and most importantly a perfectly imperfect child of God.